What is Docker Compose

Docker Compose is a tool that allows you to group and start a set of containers with a single command.
A YAML file is used where all the containers to be created and started are listed.
In Docker Compose, each container is defined as a service (not to be confused with the service concept of Kubernetes).

Docker Compose V2 supports the docker compose command, compared to the V1 version where the command to execute is docker-compose. This is because Compose V2 has been integrated with the Docker CLI.

Advantages of Docker Compose over Docker

There are several advantages to using Docker Compose to start containers instead of "pure" Docker.
First, you have a manifest where you specify all containers. A file is versionable with respect to executing of imperative commands, so that is the first advantage. Sure, you could create a script containing the various commands imperative Docker commands, but it is still a file you wrote and therefore error-prone, as opposed to a manifest from Docker Compose.
Another advantage is that thanks to Docker Compose, you can easily specify the order in which the containers are started listed (you will see later in detail how to do this).
Yet another advantage, Docker Compose creates a network for you for the listed containers, so that they can easily communicate with each other.

For Windows and Mac, the Docker Compose tool is already included in Docker Desktop. For Linux, an additional package must be installed.
I reproduce here the official doc on how to install Docker Compose: https://docs.docker.com/compose/install/.

You will write a Docker Compose manifest to containerize a simple Java Spring Boot application, which uses Postgres as the Datasource. You can find the project link here: Spring Docker.

First, if you do not want to create the Spring Boot app image via Dockerfile, you can use the command ./mvnw spring-boot:build-image. Otherwise, uncomment the line where the build field is in the docker-compose.yml file.

Located in the path of the docker-compose.yml file and run the command: docker compose up

With the commands docker network ls and docker ps you can see that indeed the network has been created and the containers, which are up & running.

Also, using the docker inspect command on the three containers, you can verify that they are part of the same network, spring-docker_default. 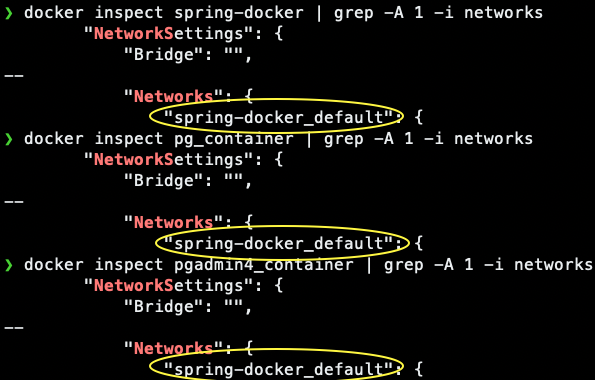 You can turn off containers using the docker compose stop command.

The next time you start with docker compose up, Docker Compose will start the previously created containers, without creating them again from scratch. This is also true when you add a new service (container) to your manifest.
Docker Compose creates only the new containers, or updates the old ones if there have been changes to the YAML.

The docker compose down command, on the other hand, not only shuts down the manifest containers, but also destroys them, as well as destroying the network (but the volume for obvious reasons is retained):

In this article I gave you a general overview of Docker Compose. My advice is to always use Docker Compose when you need to manage multiple interconnected containers.
With the manifest you have at your fingertips the characteristics of the container, such as which image it uses, its volumes, etc.
Also, editing a container (such as updating its image version) is much easier. Just edit the manifest and run the usual docker compose up command (with Docker imperative commands, you should first shut down the container, then destroy it, and finally recreate it with the new image version).