What is a container

A container can be defined as an isolated process.
Linux kernel features such as cgroup and namespace are used to allow these processes (the containers) to be independent with other processes and with other containers themselves even if they are running on the same machine.

A virtual machine (VM) is a virtualization of the hardware of the host computer so that a new operating system (a new kernel) can be run.
If you choose to use this technology to isolate your various applications in production, you will need to create multiple VMs.
Virtual machines are created thanks to a software in the host operating system, called hypervisor or also virtual machine monitor (VVM).
The hypervisor then has the task of creating and running VMs.

A container, on the other hand, is simply an isolated process that shares its kernel with the host system. Consequently, a container is much lighter than a VM (order of MB vs order of GB). Another consequence is that the process of importing/exporting a container on a new machine is much faster than that on a VM.
Basically, each of our applications will be a container.

Here is a drawing that summarizes the concept written above:

Virtual Machine and Container: does one exclude the other?

No, actually, containers are often run inside VMs in production.

Docker is a technology that allows the creation of containers and the management of their lifecycle (create them, start them, shut them down, destroy them...).

The engine that runs Docker is called the Docker Engine.
It is based on the client-server architecture, where the server is the Docker daemon called dockerd, which allows to perform the various operations on containers, while the client is the CLI, which through the API of Docker interacts with the Docker daemon, through a channel of communication type socket Unix (the Docker daemon is listening on /var/run/docker.sock).

You can have clients and servers on the same machine, but also on different machines. In addition to the CLI, we can also have graphical interfaces (e.g. Portainer) as Docker clients.

An image is a read-only template that contains instructions to build containers.

An image is based on several read-only layers. Creating a container, creates an additional layer, called the "container layer", which is the only writable layer (and is not persistent).
Also, often an image is based on one or more images. For example, you might create an image of application from a ubuntu image.

You can create custom images via a file called Dockerfile (we'll see in the next article how to use it), or you can download images from a registry, such as the Docker Hub, which is the default registry.

In the next article, talking about the Dockerfile, we'll take a closer look at the layers part.

We mentioned that containers take advantage of Linux kernel features, so I recommend trying Docker on a Linux distro, even in VM.
Otherwise you can install Docker Desktop for Windows and MacOS, which allows you to run Docker in a virtualized way.

At this link you will find the official guide to install Docker on all operating systems: https://docs.docker.com/engine/install/.

If you use Docker Desktop for Windows, I recommend to download also from the Store the Ubuntu application (or similar), and then enable the integration on Docker Desktop from the options of the latter, so you can use the commands as if you were on Linux. 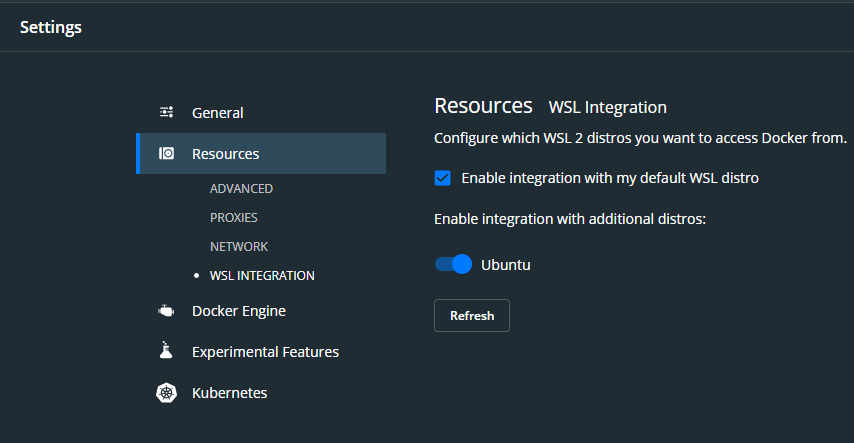 To verify that the installation was successful, we run from the terminal:
docker version
In response we should get the info about the Docker client and the Docker server.
Let's now try to download the Ubuntu image by running this command:
docker pull ubuntu
we should have a similar answer:

The image, not being present locally, is downloaded from the default registry, the Docker Hub (Downloaded newer image). Also note the latest tag; if you don't specify a tag, Docker by default downloads the one with the latest tag.

The tag indicates the version of the image. It does not necessarily correspond to the version of the application. I recommend not to use the latest tag, since it points to the latest version (but it is not obvious, it is the responsibility of the image developer) of an image at that precise moment. It is always a good idea to download the image with a precise version, to avoid compatibility problems.

To see the list of downloaded images, we can run the command:
docker images

To build a container from an image, we must use the run command followed by the image name or image id:
docker run ubuntu

The list is empty! So let's see the list of all containers, even the inactive ones:
docker ps -a

The container status is Exited; this is because containers execute a main command (with PID 1), in this case "bash", then when the command is finished, they stop. We delete the newly created container with the rm command followed by the container name or container id:
docker rm priceless_hellman

The container name, not having specified it during the run command, is chosen by Docker randomly.

We run docker ps again to see the list of active containers:

This time the container is UP & Running!

Stop and Start of a container

To stop a container, simply run the stop command followed by the container name or container id:
docker stop ubuntu-container

Let's enter inside the container: the attach command

To get inside a container, we can use the attach command, followed by the name of the container:

Now we are inside the container, with the root user! We run the command ps aux to see which processes are active in the container:

We now exit the container by executing the exit command.
Let's see the list of active containers again. We have a surprise: ubuntu container is no longer active!

This is because, by default, running the exit command, Docker kills the main process, with PID 1. The container is active only if the process with PID 1 is active.

To make sure that when we are attached to the container, it does not terminate when we exit, we need to press CTRL+p and then CTRL+q.

Execute commands on a booted container: the exec command

We can execute commands on a container without needing to enter it.

We could also enter a container by running another bash command, thus avoiding the attach command:

In this introductory article on Docker, we quickly saw what a container is and some differences with VMs.
We then saw Docker's basic operations to manage the lifecycle of a container and other commands such as attach and exec.
In the next article we will see how to create a custom image with the Dockerfile.